Russia and Ukraine are significant producers of crude oil and natural gas commodities essential to the energy industry. The Russian invasion of Ukraine has caused significant disruptions in these energy sources, particularly for Europe. With winter around the corner, now is an appropriate time to provide a primer on the situation. This article will focus on the outlook for natural gas in Europe by providing background, a timeline of events, a summary of responses, and potential market and economic implications going forward.

Focusing on sources of energy is not typical for most US consumers. We flip the light switch, or set the thermostat, and the light or heat comes on. So, here are some relevant facts that will help readers understand Europe’s dilemma.

The loss of a major energy supplier has caused dramatic price spikes in natural gas in Europe. In August, as Russia cut its exports through Nord Stream 1 to near zero, benchmark natural gas prices hit more than 20 times their 2016–2020 average. Imagine paying 20 times your typical monthly heating bill and you can appreciate the scale of the shock hitting Europe. 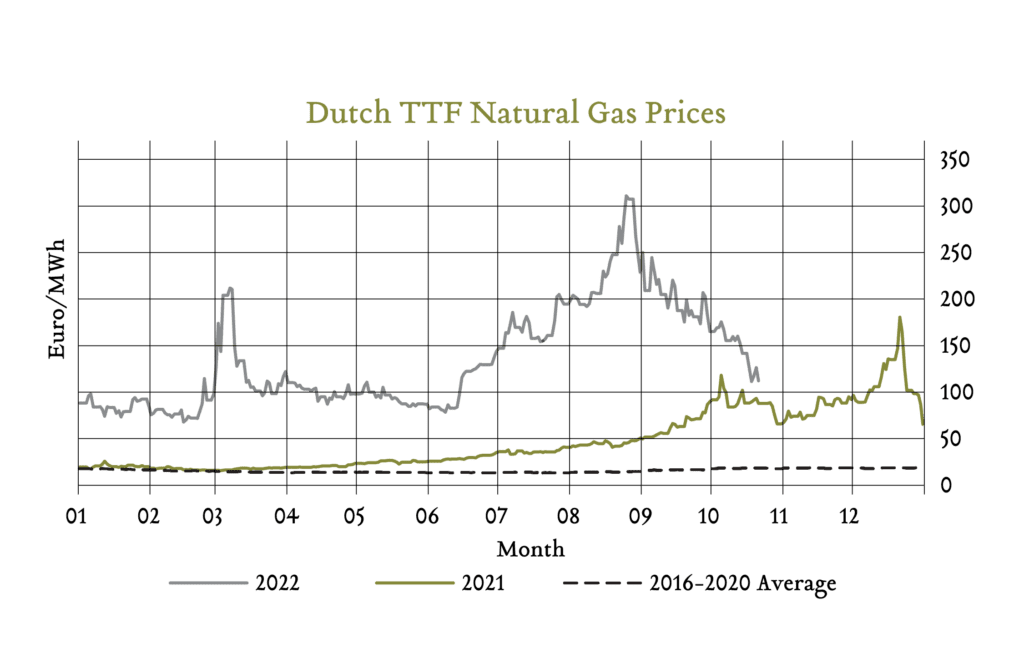 Prices remain extremely elevated, 6.5 times the historical average, but have eased recently due to the first major response from affected European countries: building natural gas storage to survive the winter months. They’ve done this by importing more energy from Norway, and from LNG markets like the United States and Africa. 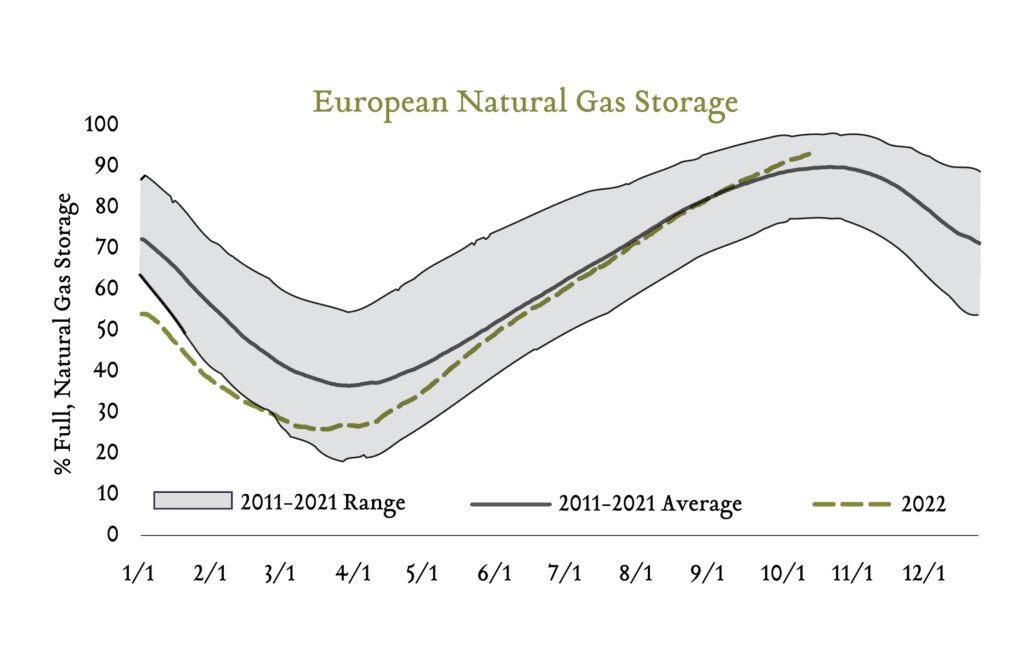 As of this writing, these efforts have been relatively successful. Natural gas storage sits at around 93% of capacity, above the average of 89% for this time of year. At these levels of storage, Europe may be able to handle an average winter heating season without resorting to blackouts or energy rationing. If the winter is colder-than-average in Europe, or in regions that compete with Europe for LNG imports, maintaining adequate supply could become a multi-year problem.

In addition to building up storage, affected governments have enacted fiscal support to blunt the impact of higher energy prices on businesses and consumers. For example, on September 29, Germany announced a 200 billion euro plan to subsidize gas costs, allowing consumers to pay 0.12 euros per kilowatt hour for the first 80% of the amount of energy they used in 2021. Across Europe, around 670 billion euros in fiscal support have been allocated to protect citizens and businesses from higher energy prices.

Finally, governments have also stepped in with subsidies, and in some cases, nationalization of businesses involved in the production of energy. Germany, for example, nationalized Uniper, buying it from Finland’s Fortum, at a cost of around 29 billion euros. Uniper is an electric utility company and had previously been a large importer of Russian natural gas. The estimated value of credit lines, loans and bailouts total another 180 billion euros. Combined, this support is nearly equal to the amount of borrowing undertaken by the EU to navigate the COVID-19 pandemic.

The first and most direct impact of this energy shock has been to inflation. Several European countries are now dealing with double-digit inflation, and accelerating expectations for inflation next year.

The second major impact, arguably, has been in the currency markets. The need for additional deficit spending has contributed to a depreciation of many European currencies against the US Dollar. 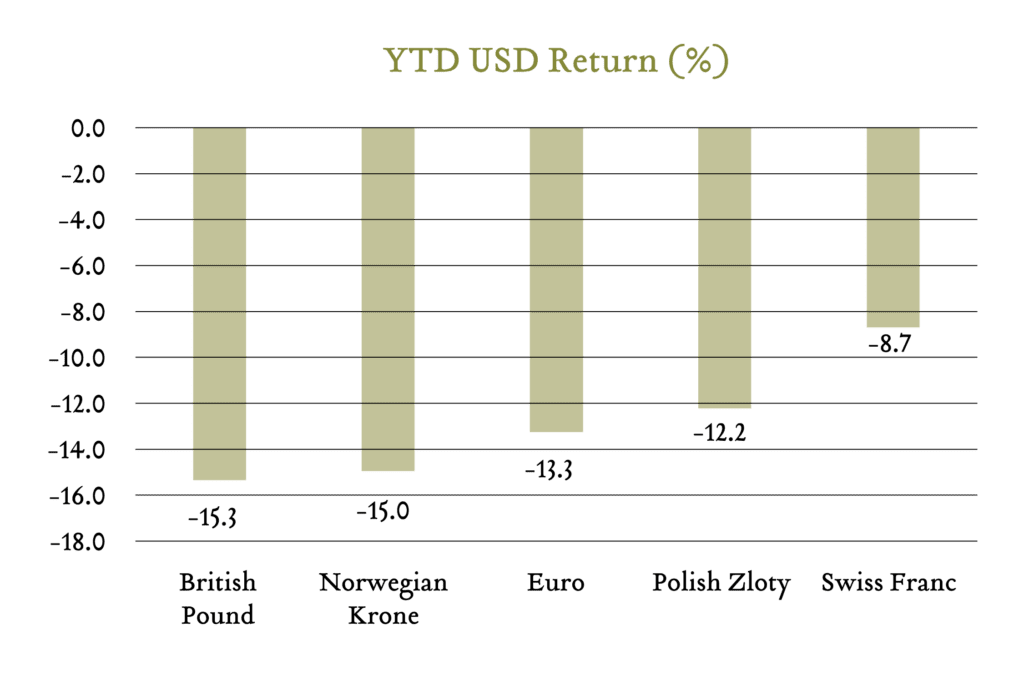 Following these high levels of inflation, central banks in Europe have been moving to more restrictive monetary policy stances. 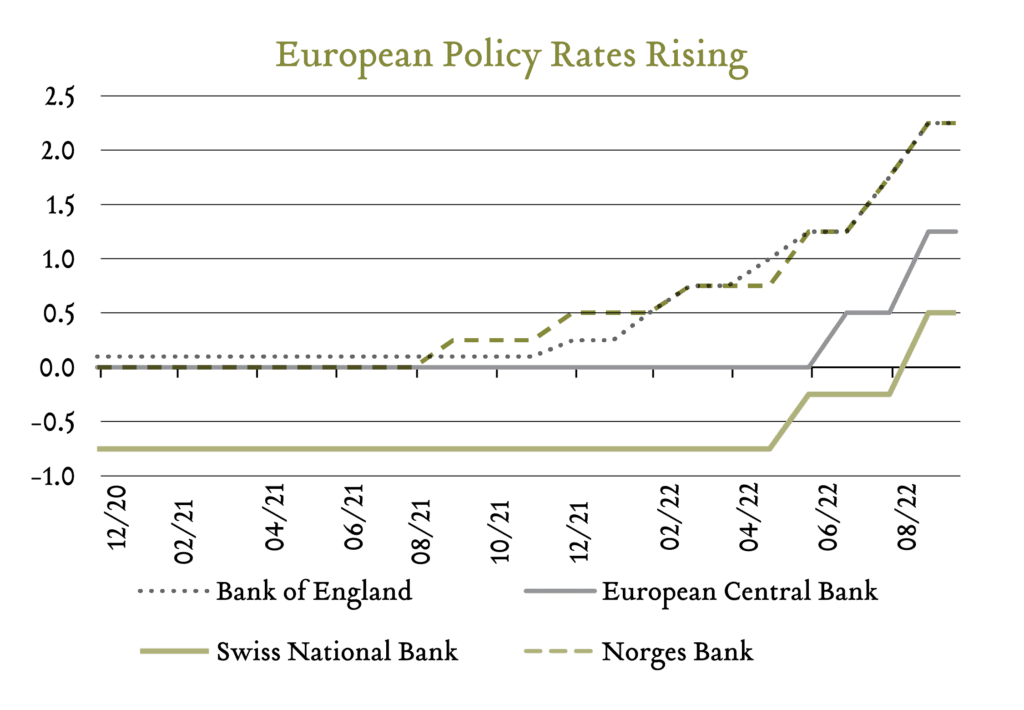 The combination of higher interest rates and higher energy costs is likely to push some European economies into recession, if they are not already there.

The final impact worth mentioning is on the prices of natural gas in other regions. LNG export markets will be key to resupplying Europe. Any disruptions to the export market could leave European governments facing difficult choices around blackouts and energy rationing. This new source of global demand will keep natural gas prices elevated in countries like the United States as well, where natural gas prices hit 10-year highs in May and August this year. It will likely be a multi-year project to rebalance the energy markets to cope with the absence of Russian supply.

The Russian invasion of Ukraine continues to impact the economic and investment landscape. Europe is navigating a natural gas crisis that has disrupted their economies and required significant fiscal support. The region is entering the colder winter months with strong levels of storage and a mild winter could leave them in a positive position in 2023. However, the energy markets remain a key source of risk and are likely to remain volatile in the short-term. We will continue to monitor the situation and provide updates as warranted. Thank you for the opportunity to serve on your behalf.